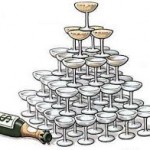 Many folks continually criticize the GOP for what they call Trickle Down Economics or Reaganomics, still, as bitter and persnickety as these folks get, perhaps they miss the point. You see, if you give money in social programs the businessesand corporations get the money anyway within a few transactions and the poor are left with their hand out for another free fish the next day, still poor.

If you help businesses with incentives to help foster the economy or steer it where you will, it will move slightly in that direction and hopefully those economic gains will propel lower prices and more market entrantsand jobs, thus, more competition and lower prices. Does this really work? No, in the end all you’ve done is create a mechanism for crony capitalism through lobbyists, but if you give money to the poor that doesn’t work either because you make people weak, helpless and reliant on a government that can never really give them all they desire, not to mention that the lobbyists on the left, labor unions for instance also unbalance the fairness of the game and that creates wage inflation.

There was an interesting article recently in Star Dem [star] com which is a Democrat propaganda website which spouts all sorts of socialist blather [in my opinion]. The article was titled; “Trickle-down economics’ is real,” by Frank L. Miller of Denton and published on January 19, 2014, a light news day Sunday of course, as this sort of nonsense probably wouldn’t fly too long during the business week, because those in the know would hammer the article very quickly. Nevertheless the article stated or attempted to purport the following;

“Thomas Sowell had me going there for a minute with the headline, ‘The trickle-down economics lie,’ My first thought was that he was finally acknowledging that this economic theory was a bust. But no, he was actually suggesting that there never was any such thing, not even in J.A. Schumpeter’s 1000-page book. What is ‘trickle-down economics?’ Well, according to Wikipedia, it’s ‘tax breaks and other economic benefits to businessesand upper income levels to benefit poorer members of society by improving the economy as a whole.’ Sound familiar? This is precisely what President George W. Bush did when he granted the tax breaks for the rich, breaks the Republicans were willing to shut down the government to maintain.’

Now then, Trickle Down economics is a derogatory term used by donkey-driven democrat political operatives, just as they used the “Bush Doctrine” of preemption as if he thought of it, when in reality it came from the early 1700s from Karl von Clausewitz in his treaties “On War” which is still used by military strategies to this day and even Sun Tzu had spoke in similar terms in his writing “The Art of War” and this just goes to show how the Democrats rip off the narrative and splatter the news and Internet with seventh grade level debating points, serving them up to the mindless masses to try to convert the people to their viewpoint and maintain synergy amongst their brainwashed followers.

We’d love to hear your opinion and feedback.