Has the retailing world gone insane? Over the last several years online sellers have made significant dents in brickand mortar stores in every market and in every city. Many retailers had to jump into online selling whether they wanted to or not to keep a presence to the consumers. This addition has been costlyand for many retailers has not been all that popular, as many online shoppers are scouring for the cheapest price.

Fast forward to today when new retailing reports are showing that many online stores that had been exclusively on line are venturing into brick and mortar situations. Has everyone lost their minds? Is this backwards day?

An article that was published in USA today talked about an online fashion retailer in San Francisco that has sold online only for a decade and then decided that it would be a great idea to open a physical store so he could interact with the customers. Lo and behold he discovered that he makes larger sales and were able to interact better with the customers. OMG – something us physical retailers have known about forever!

So now the hipster millennial trend is the NEW thing…opening physical locations! They even have a name for it – it is called omni-channel marketing. We used to just call it RETAILING!

The newfound genius’ have discovered that there are great benefits by having a physical location and those selling fashion feel they can no longer ignore the client who wants to touch merchandise. Wow. something we have all been doing for eons until many were put out of business because of these same genius’ saying the internet is the ONLY way to sell. So, they rise through the carnage THEY made of the brick and mortar stores only to bring it back again. But this time they think they have invented a NEW way to sell!

My favorite addition to this story is that after years of the decimation of book stores and the burying of Walden Books, Borders and the dwindling down of Barnesand Noble, an announcement was just made that Amazon will be opening physical book stores next year!  I give up!! Is it just me?  Share your thoughts… 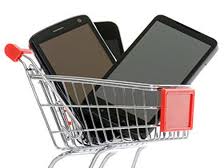 An interesting new study has been released that shows consumers are using their smartphonesand tablets as shopping tools at a higher rate than reported previously. Over 55% of all retail-related internet time is starting on a smartphone or tablet as opposed to a desktop computer system.

Interestingly though, consumers were less likely to complete a shopping transaction on their smartphones and completed those transactions while on their desktops. Clothing and accessories were the category leaders for online shopping.

The motivation for the use of mobile devices has been shoppers who are “show-rooming,” looking for cheaper prices while inside the store! Almost 2/3rd’s of the users were visiting the stores website or APP while they were inside the store, to see if there were online discounts, etc. They went online in hopes of finding a better deal.

Another interesting fact was that men outpace women in making mobile purchases using their smartphones, indicating that they may be more trustful of using mobile devices to transmit credit card data, etc.

Welcome to retailing in the 21st century. Highly competitive in every way with margins cut to the quick for the retailer. Good times!  Retailers Forum magazine and website welcomes your comments and opinions. Feel free to comment on this article and others.